Chapter 1.  Get Started With Inkscape Extension

What Is Inkscape Extension?

After we launch Inkscape, click menu Extensions -> Render -> Triangle.... A new dialog will pop up on screen and it looks like this. 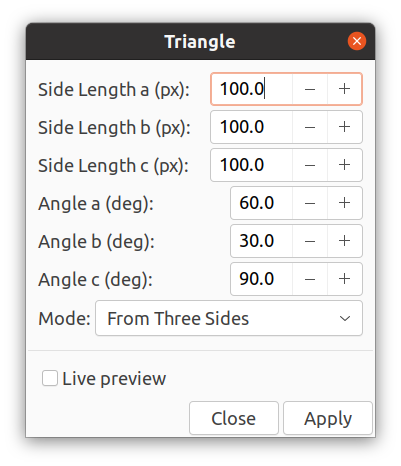 If we click the apply button, the extension will draw a triangle on the Inkscape canvas. The three sides of the triangle are all of 100 px length. We can also toggle the live preview box on to show a preview of the triangle. Obviously when the Mode is set to From Three Sides on the dialog, the extension program ignores the three Angle values.

Let’s change the Side length a (px) value to 50 and re-apply the extension. The program will draw a triangle like this. We know the side on the right hand is a.

Next let’s try to enter an invalid number and see the result. Change the Side length a (px) value to 250. Note the length of a triangle side can’t be longer than the sum of other two sides. The program will generate this error message.

What Extensions Can Do?

The Inkscape itself comes with many extensions which are listed under the Extensions menu. Some of the extensions are intuitive to use such as Gear, Grid, and Calendar.

The real power of the Inkscape extension system is that we can treat it as an API (Application Programming Interface). It provides many classes and functions on which programmers can build user extensions.

The drawing below shows a small portion of a large sign poster file which is created with an Inkscape extension. The full size poster file contains about 700 sign drawings.

Most Inkscape extensions are written in Python programming language. If you are not familiar with Python, the official python tutorial is a good start point.

Let’s find out where the extension programs are located. Click the menu Edit -> Preferences in Inkscape and choose System on the left panel. We can find two extension directory settings. The value in User extensions field is shown below.

And below is the value of Inkscape extensions field. We also call this system extensions directory.

My computer runs Ubuntu 21.04 OS, and Inkscape 1.1 is installed through apt commands as suggested on this webpage. If you are running Inkscape under other OS, the directories will be different. In Windows, the two directory paths look like the two lines shown below.

We can add two aliases to the ~/.bashrc file to have easier access to those two directories when we are developing extensions in Ubuntu. This is for Linux users only.

Let’s check the system extensions directory and see what is in there. The Linux commands below show that the directory has a total of 554 files and 226 Python files. The fourth command below indicates that the Python files have a total of 43,979 lines of code for Inkscape 1.1.

The system extensions have lots of code, and it’s almost impossible for one person to read and understand all of them. This extension tutorial series will try to discuss and explain a small subset of those files.

If you want to take part in developing or improving system extensions, this gitlab source code repository is the place to get started.

Inkscape versions 0.91 and 0.92 already come with many extensions. However they are mostly written in Python 2. Even though Python 3.4 is released back in 2014 and many people have been writing programs in Python 3. Inkscape extensions are in Python 2 for many years. The reason is that most system extensions are created by various developers over time and it requires some serious work to convert them to Python 3. The root problem is that Python 3 is not compatible with Python 2.

If you somehow get an old Inkscape extension which does not work in Inkscape 1.1, try to load it in Inkscape 0.92.X and it may work well.

This tutorial series is developed from my notes. It’s not as formal as a typical book or software manual, but it’s in a much better shape than my notes. I am trying to point the right direction for people who are interested to learn more about Inkscape extension development.